I-W-B.de: When did you start Chapel Gate and J. J. Corry and what was your motivation behind?

Louise McGuane: I founded the business in 2015 after a 20 year career with multinational drinks giants. all over the world. I was living in Singapore and my husband was in London so something had to give. I agreed with my husband that I would move home with the caveat that I would start my own business.  I could see that Irish whiskey was beginning to come into line with the global ‘craft’ whiskey trend. So I decided to quit my job and move back to the family farm in Ireland to set up the business. My initial plan was to set up a grain to glass distillery, so I began to research the history of whiskey making locally. I discovered some labels being sold by a local antique dealer from the 1890’s from J.J. Corry.

I delved into the history of that particular brand and discovered that JJ Corry was a well known whiskey maker in my local town. After a significant amount of research I discovered that whiskey bonding was once a vital part of the Irish Whiskey Industry but it had died out in the 1930’s when the Irish Whiskey Industry collapsed. I decided to bring this lost art back as I felt it was unjust that it had been written out of Irish Whiskey History and as we are in a resurgence of the industry I felt the time was right.

I-W-B.de: J. J. Corry is an old brand Chapel Gate now revived. Tell us a little bit about the history of the original J. J. Corry.

LG: JJ Corry was an amazing entrepreneur. Born into a family of 14 or 15 children most of whom emigrated to the USA he decided to stay in Ireland and make a go of it. He started off as an autionier selling land locally then purchased his shop on 63 Henry St. Kilrush in the late 1800’s. At that time the town of Kilrush was a very vibrant Port Town and hosted ships with goods from all over the British Empire. As a result JJ sold a wide variety of international goods like tea from India, Wine from Bordeaux, Rum from the Caribbean, port etc. . He also sold musical instruments, ammunition, you name it. He sourced his whiskey from Galway and Limerick at the time most likely and custom blended it for his individual customers.

I-W-B.de: Whiskey bonding was a big think in the 19th century. Besides J. J. Corry who were the big names of whiskey bonding in Ireland?

LG: Every mid- sized town in Ireland had its own whiskey bonder it was a very common way of selling whiskey. Even today if you drive around Ireland you will see the name whiskey bonder written in Gold over the doors of pubs. There were larger bonders in Dublin who had much bigger operations that exported to the USA and the rest of the British Empire. Mitchell & Sons would have been very well known in Dublin and originally made Green Spot until the brand was sold on to Pernod Ricard the makers of Jameson.

I-W-B.de: Only recently more bonding businesses appeared on the market. W.D. O’Connell comes to mind, Egan’s is also an old brand rebuild by the descendants of the Egan family from Westmeath. Your own company and its brand reached an amazing standing within the Irish whiskey community. Will whiskey bonding be a big thing in the next years?

LG: I hope so, we need more sub categories. However bonding needs to stand for something. We try to differentiate ourselves by having end to end control of what we can control. We source our own empty casks for new make and match them to the spirit, we mature those casks in our own bonded warehouse on our family farm and we’ve built a bonders blending room on site. This differentiates us from Independent bottlers in that we have total control of sheparding our spirit from the still to bottle.  I think its important that Whiskey Bonding is defined and protected.

I-W-B.de: As a bonder Chapel Gate is depending on the products of distilleries. Those Irish whiskey distilleries had an astonishing comeback during the last ten years. How do you see the current situation and what development do you expect for the next five years?

LG: I think its exciting times, it is an honour to work in an industry that is being re-born. The future is bright and the variety of irish whiskey is only growing which is great news for me as a bonder. The more flavours I can add to my Flavour library for blending the better/

I-W-B.de: In the last decade the demand for world whisky was growing. Do you expect this to go on? And with a new decade starting: what markets are the places to be in the next ten years?

LG: We are in an up cycle for whiskey, it happens once every few generations. If you recall a few years ago everyone was into vodka, the next generation  has moved on an they seek out brown spirits for flavour and substance. We have a good 15-20 years to go in this direction before the cycle changes.

LG: The hope is to eventually focus on our core portfolio. But as a young business you have to go where the custom is. I love creating Bonder’s Blends for people its carrying on the tradition of J.J. Corry who did the same for his own customers. We are a very young business and also very very small in comparison to many others so we’ll do what we need to grow and survive until such a time as we can reach scale.

I-W-B.de: In autumn you released The Chosen, a 27 year old luxury Irish Whiskey in the upper price range. Was that a once in a lifetime expression or can we expect more high end whiskeys like The Chosen?

LG: We (in Ireland)  have some of the finest mature stocks in the world and they deserve to be hero’ed in the same way as Scotch.  You can expect more from me and from the larger players, Irish whiskey has come of age and there is a confidence now in the industry. There are folks out there who seek out luxury expressions and who are we to deny them? 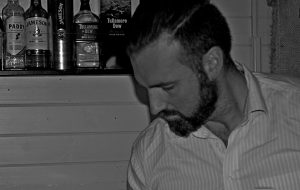