(Note from the author: This is a automated translation of the original German article.)

In April 2022, I sat with Graham Coull in a small glassed-in room
at the Dingle Distillery. Graham is Distillery Manager, Master
Distiller and Master Blender there. It was a sunny early spring
afternoon on the Dingle Peninsula.
After drizzle and low clouds in the morning, this change in
weather was not foreseen. “That’s the way it is here in Dingle,”
Graham says. “The weather changes all the time.” Despite 9 degrees
outside, Graham wore shorts. He also wore the bright neon yellow
safety jacket worn by the staff on the small distillery premises.

The Dingle Distillery is located in Dingle Town on the peninsula
of the same name. This is one of the three peninsulas of County
Kerry in the southwest of Ireland. Its southern neighbour, the
Iveragh Peninsula, is particularly famous. It is home to the Ring
of Kerry. However, the Dingle Peninsula also has much to offer
visitors. From early Christian monastic settlements to late Stone
Age stone formations to modern leisure facilities. And above it
all is a wild landscape of green hills, rugged mountain shapes and
tiny villages. Dingle Town is the largest settlement on the
peninsula and the Dingle Distillery is at its western end. Behind
it come two more villages and then this western part of Europe
ends with the Atlantic Ocean.

Dingle Whiskey and Graham Coull: How it started

In the glass room in Dingle, Graham Coull tells us about the
beginnings of the distillery. Founded in 2012 as one of the first
independent micro-distilleries, it was a pioneer for many others
to follow in the years that followed. In December 2015, the three
founders Oliver Hughes, Liam LaHart and Peter Mosley finally
filled Cask No. 1. The first Dingle whiskey was born. However, it
did not go on sale.
Rather, the cask remains stored as a memento. Instead, Cask No. 2
went to the starting line, a triple distilled single malt, matured for three years in an ex-bourbon
barrel. The whiskey in the distinctive, bulbous bottle and wooden
presentation box is now a popular collector’s item that fetches
four-figure hammer prices at auction.

While this piece of contemporary history was being written on the
outskirts of Ireland in 2015, Scot Graham Coull was in his eighth
year at Glen Moray as Distillery Manager, Master Distiller and
Master Blender. Prior to that, he was Distillery Manager for
William Grant & Son at Glenfiddich for eleven years. His time at
Dingle began in October 2019. “I had been with Glen Moray for a
long time by then and was heavily involved in the positive
development of the company. And I could have just continued there
for the rest of my working life,” Graham looks back.

“The whiskey industry was booming and companies regularly asked if
you could imagine working for them. I always turned them down.”
But when he came into contact with Dingle about the vacant post
of Master Distiller, his attitude changed. “Dingle offered a lot
of potential for development. I saw what the founders had already
achieved here and the opportunity to bring a fledgling project of
theirs to maturity.”

The warehouse also houses the 500 casks of the Founding Fathers.
The project served to finance the Dingle Distillery. These first,
self-produced barrels were exclusively for sale. After the spirit
had matured into whiskey, the buyers, the Founding Fathers, could
decide to let the casks rest, to bottle them for themselves or to
sell them back to the distillery. The income from the project
enabled the founding team to finance their start-up independently
of banks.

The Dingle Distillery quickly found a following for its whiskeys.
Six single malts and five single pot stills with different cask
finishes were released in regular small batches over the first
seven years. In autumn 2021, the series of malts ended with the
last batch. At the same time, a single malt appeared as a core
release. The last batch of Single Pot Still was released in spring
2022. This will also be followed by a core release in this
category. Currently, the production ratio of malt whiskey to pot
still whiskey is 70 to 30.

The concept of small batches is related to the relatively low
production capacity. The distillery’s maximum capacity is 170,000
litres of pure alcohol. “We are at almost maximum capacity,”
Graham explains. This is where Graham’s real job begins. “A
distillery is a no-brainer on a day-to-day basis. Feed the
equipment with water, grain and yeast and it runs and runs and
runs.” That’s why Graham put an emphasis on what happens away from
the production processes and brought in his ideas from over 25
years of experience in the industry. Together with the owner team,
he worked out a development concept. The central goal of this
concept is the introduction of two Core Range product lines.
These are to consist of single malts and single pot stills in
different age groups. The first step has been taken with the
single malt that has already been released.

In order to take these further steps, the Dingle Distillery needs
greater capacities. The planning for an expansion has been
completed and the construction measures have been approved by the
authorities. Work is scheduled to begin in the summer of 2022. For
this purpose, the current metal construction hall will be
demolished. Only the listed masonry will be preserved. The
conversion will increase the production area and create more
opportunities for guided tours for visitors. “Once it started, we expect
construction to take eightteen months,” says Graham.

During that time,
gin and vodka production will move to the nearby warehouse.
Whiskey distillation will stop completely. Graham Coull says: “We
will then have a production capacity of 470,000 litres per year,
which is more than twice as much as now.” This should close the
inventory gap caused by the temporary loss of production within a
year.
The expansion of production takes place without enlarging the
stills. The significant increase in production can only be
achieved through more space, more fermenting vats and greater
labour efficiency. Nevertheless, the construction planning already
takes into account sufficient space for larger stills, should they
be needed.

The market forecasts, even after two years of pandemic
activity, are positive. The Irish Whiskey Association continues to
expect strong growth figures for the industry. Graham finds the
developments in the Irish
Whiskey market exciting. “It’s hard to say how the individual
distilleries will develop. Some of the new ones won’t make it.
Others will be swallowed up by corporations, as is the norm in
Scotland.”

Independence is the big advantage of Dingle Distillery

Graham did announce a future release of peated Dingle whiskey during a
tasting in autumn 2021. But it will remain small batches and
exceptions. “I’m not too big a fan of peated whiskey myself. I
prefer good port finishes.” In contrast, pot still whiskey,
Ireland’s unique selling point, has found a new friend in Graham
Coull: “I think pot still whiskey is something unique to Ireland.
It is very different from malt whiskey. As a distiller, I also
welcome the possibilities that will hopefully soon arise with a
change to the current Technical File. In particular, being able to
work with more oats and rye is very exciting.”

I thank Graham Coull for the time and the tour of the Dingle
Distillery. 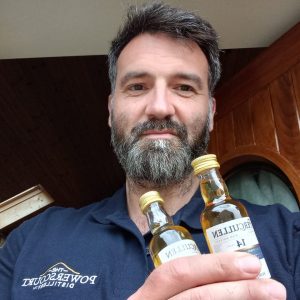